Your pension could build a better future for your children: here’s how.

The West Midlands LGPS Pension fund currently has over £490 million invested in the oil, coal and gas industries, who are driving the climate change that’s threatening all of our futures. It’s our money, we’ve worked and saved for it, it’s our retirement plans. And it’s our planet that we, our children and grandchildren have to live on.

Why should we accept a scenario where “planetary survival is pitted against pensioners’ future income”? No-one needs to choose between their retirement and their children and grandchildren’s futures – there’s another way to do this.

We need to move beyond just taking pension money out of fossil fuel companies and putting it into slightly less damaging alternatives and start actively using our money to build the future we want together. The solution is to take back the money we have produced, and start investing it in building community-owned and run alternatives. This allows us to have more of a say in what types of green future we want to see in our communities, to create local jobs and address local concerns such as fuel poverty. We could invest in community-owned renewable energy, infrastructure such as trams, community-supported agriculture to produce healthy local food, or better social housing – the possibilities are huge.

This has already started to happen elsewhere. Lancashire pension fund has invested in Westmill Solar Cooperative, which produces enough power to run 1600 homes. And Islington council has invested £150 million from its pension in building social housing.

This is why Divest West Midlands is calling on the West Midlands Pension fund to divest from fossil fuels and start reinvesting in building the new green economy.

What would you like to see your pension fund money doing locally?

Look out for our report coming soon that covers the technical issues in more detail. 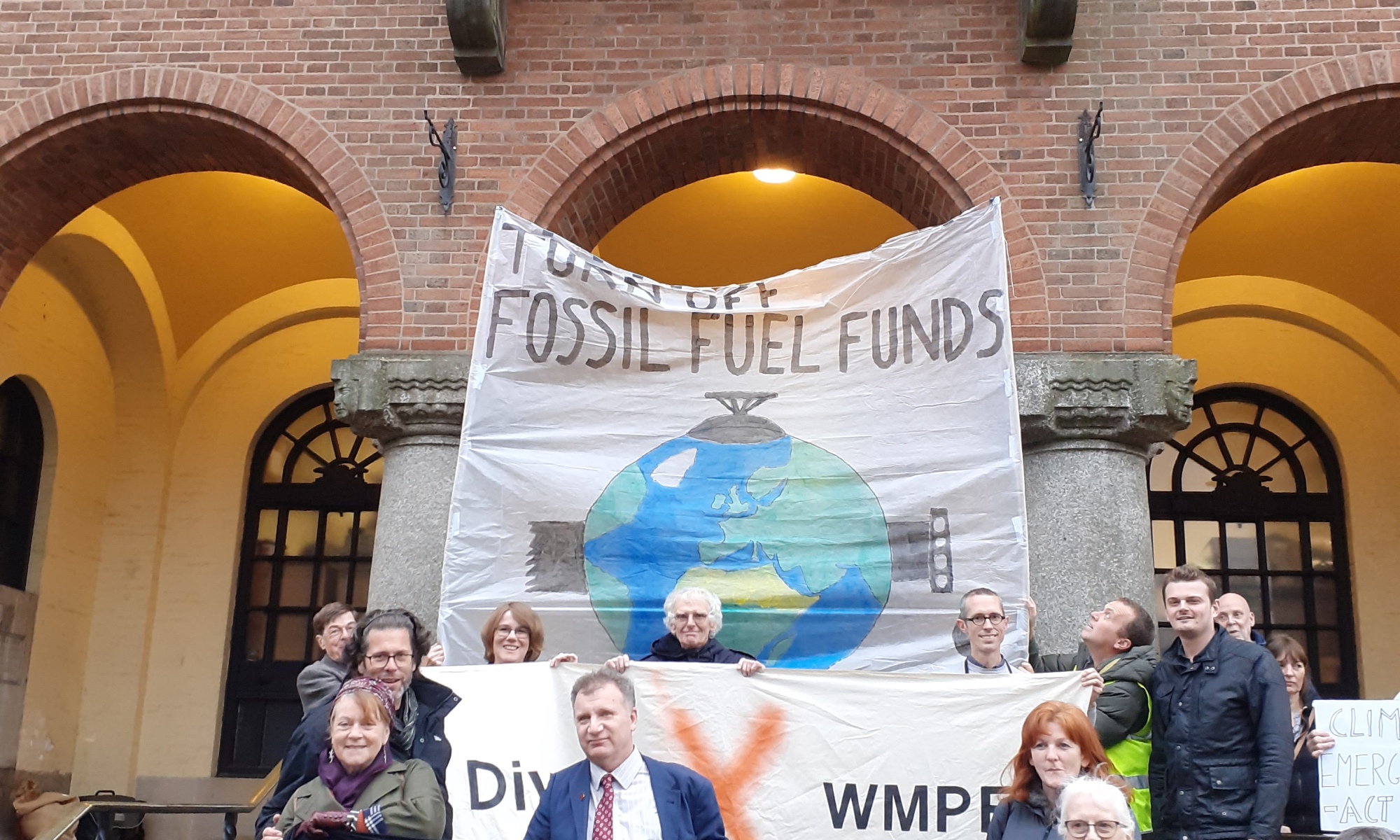 Last night, Dudley Council voted unanimously on a cross-party motion calling on the council’s pension fund to divest from fossil fuels, demonstrating a commitment to action on climate change and reducing the financial risk to pension members.

The motion, which was tabled by Councillor Pete Lowe, received full support from across the council members. It follows a trend of councils passing motions to divest from fossil fuels. This is amid growing concern about the impacts of climate change and a responsibility to reduce financial risk for pension members.

In his speech Councillor Lowe said:

“Tackling such a colossal challenge requires action at all levels – international, national, and local. That is why I have decided to bring this motion forward.”

“We all have a responsibility to play our part in reducing carbon emissions and this motion will put further pressure on fossil fuel companies to put more effort into the adoption of renewable energy. Our message is simple pollution doesn’t pay.” 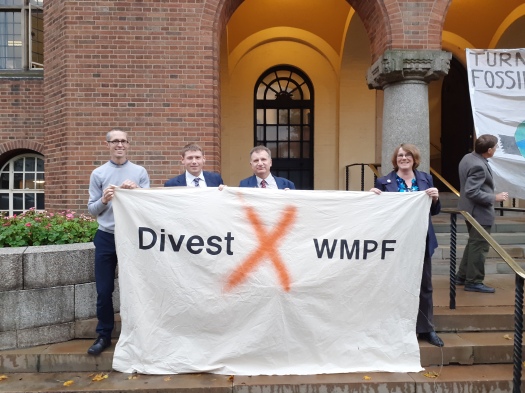 Councillor Simon Phipps who successfully tabled a Conservative amendment to the motion said:

I’m so pleased that this motion attracted the unanimous support of Dudley Council. Climate change is the biggest threat facing our society and public organisations have a responsibility to lead change. Members of the pension fund should now be given the opportunity to see that this course of action will not detrimentally affect the fund financially. I hope that the members of the Fund will see that this is the right thing to do, as this will help to ensure that the West Midlands is a leading region in the quest for a carbon neutral society. 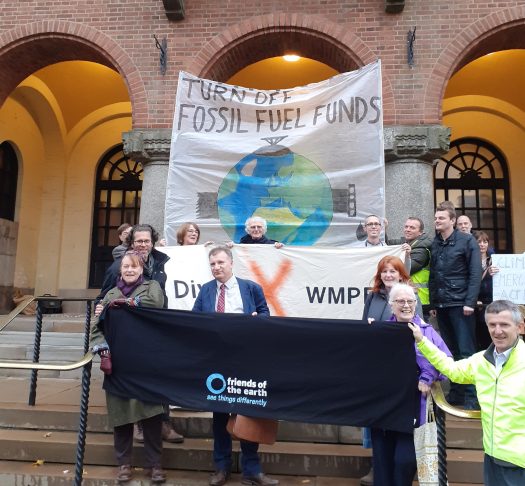 Prior to the meeting a vigil was held outside Dudley Council Chamber, relaying to councillors the wide public support for divestment. The vigil was organised by the group Divest West Midlands Pension Fund (DivestWMPF) and Dudley Green Party. DivestWMPF have been campaigning for the fund to remove its investments in fossil fuels for four years.

Kay Edwards, from DivestWMPF, who is a Dudley resident and pension fund member said:

“We are delighted that Dudley have voted for this motion which will build momentum for the West Midlands to end destructive fossil fuel funding. Shell, BP and other fossil fuel companies have no place in public pension funds, as they continue to pour investment into new oil and gas projects.”

West Midlands Pension Fund, is one of the top 25 institutional pension funds in the country, and has an estimated £490 million  invested in fossil fuel companies. These companies are continuing to invest  in new projects which undermine climate targets and put shareholder returns at risk.

This motion follows a trend in the UK. So far 12 councils have passed motions committing to divest their pensions from fossil fuels, including Birmingham City Council who committed to divestment in July 2017. The motion follows increasing local concern about the climate emergency. In September, 3,000 protestors gathered in Birmingham, and protests were also held in Wolverhampton, Dudley and other locations all around the West Midlands, with demands for more urgency in tackling climate change.

DivestWMPF are continuing to call for the other local councils in the West Midlands Pension Fund including Wolverhampton to add their voices to the call to divest the Fund from fossil fuels. 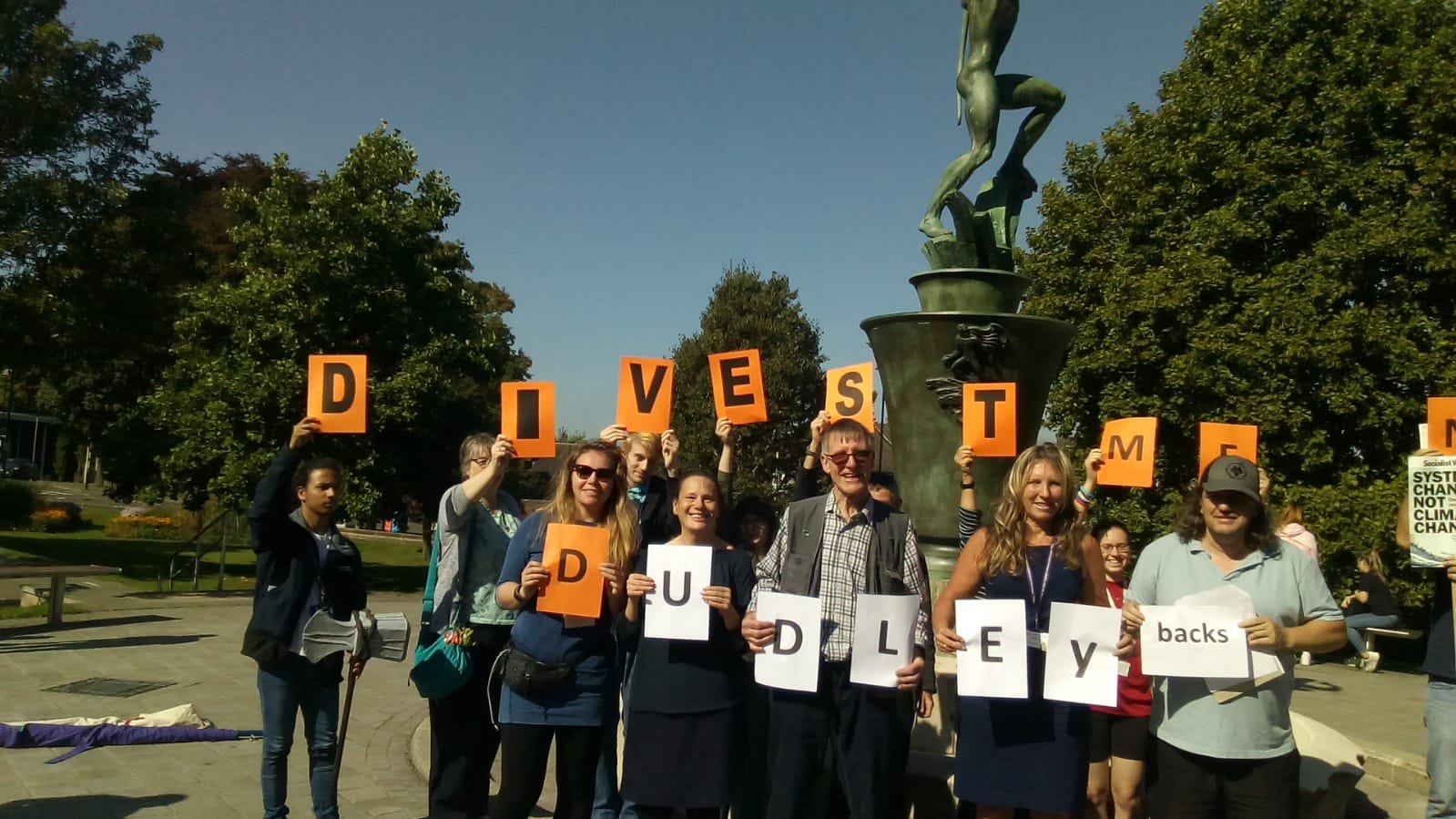 On 7th October, Dudley Council will vote on a motion to divest the pension fund from fossil fuels. This important resolution will demonstrate Dudley is committed to playing its part to solve the climate crisis. It is also a really smart policy as noted in a letter to the Financial Times:

Fossil fuel-free investing is, in fact, low-risk and profitable. The financial numbers on the fossil fuel industry’s market performance no longer add up. It has lost its competitive edge. To maintain market share the oil and gas (and coal) sector flouts the rule of law, confounds fair play, ignores shareholder concerns, distorts science and frustrates political discourse. All to advance a weak economic rationale from a bygone era. The divestment movement uses protest as a political device to open a new consensus on low-carbon initiatives. Corporate boards are the battlegrounds for debate because the fossil fuel industry has succeeded in undermining the Paris Agreement and any policy proposal that runs counter to unbridled exploration and development.

We hope all the parties in Dudley MBC will join together to support this crucial motion.

On Monday the 15th July Walsall Council will debate a fossil fuel divestment motion, calling on West Midlands Pension Fund to divest from oil , coal and gas. The motion is proposed by Councillors Shires, Barker,C. Bott, P. Bott and Young.

There was a “moral duty to leave this world in a better condition than what we
inherited” and that “Cutting emissions would benefit public health and cut NHS
costs”.

For full details of the motion see; ‘Notice of Motion – Fossil Fuels ‘

To lobby your councillor see https://divestwmpf.org/lobby-your-councillor/

N,B Unfortunately the motion was defeated, however it received the full support of the Labour and Lib Dem councillors.

A briefing for councillors was prepared, at https://divestwmpf.org/divest-west-midlands/briefing-for-walsall-councillors/

On Tuesday 18th June, in declaring a “Climate Emergency”. This was a welcome symbolic step forward for the city. Unfortunately, Coventry failed to set out a meaningful target for climate change, as the council resolved to “recommend the course of action that we are currently undertaking”. Jim O’Boyle praised Coventry’s record on climate change, but falls in greenhouse gas emissions have been small and mostly due to rising poverty and deindustrialisation. Transport emissions remain stubbornly high, and the city’s highest source of greenhouse emissions comes from food.

Coventry needs to follow Birmingham’s lead and set out a target for net zero by at least 2030. In our proposed motion we set out a manifesto for achieving this target.

How will this be funded? Clearly government need to play their part, but the council also needs to follow Birmingham in calling for the West Midlands Pension Fund to divest from oil and gas companies that are pouring billions into exploring for more fossil fuels when they already have excessive reserves. These funds could benefit local green projects and divestment would send a strong signal to the global investment community that we cannot continue to bankroll climate destruction.