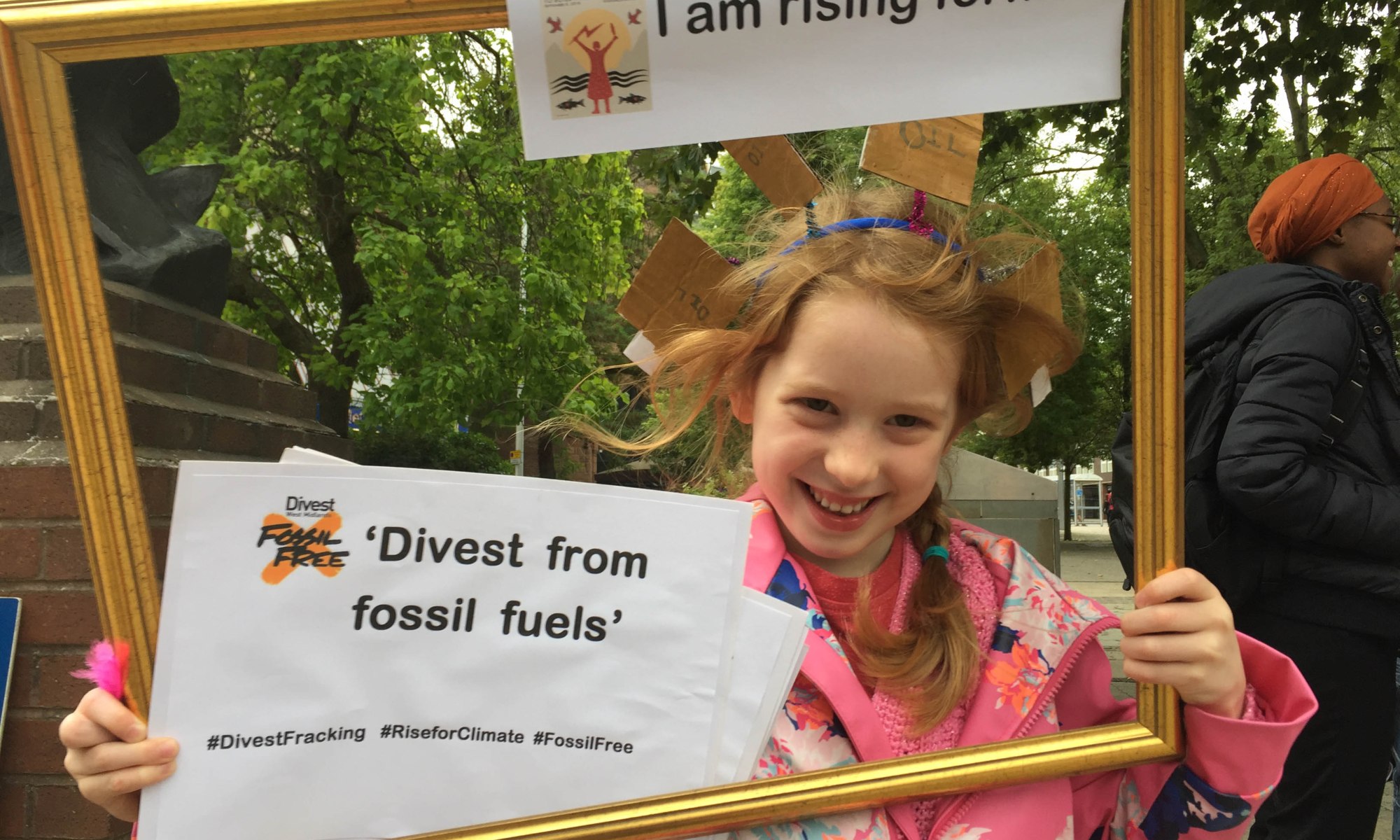 I thought it would be worth reviewing what we’ve achieved this year in our campaigning for the West Midlands local government pension fund (WMPF) to divest from fossil fuels.

2018 kicked off with fantastic news of £500 funding for the campaign from Edge Fund organised by Alex. Tim attended a public health and climate change conference and made several valuable contacts. Until joining the campaign, I had never considered the effects of climate change on public health, but it is actually considered to be one of the major risks in the coming years.

Throughout the year, the team has been busy holding meetings and spreading the word via exhibiting at and attending events, including at Birmingham City University and a multi-faith stall.

In March, Kay attended a UNISON meeting and was due to present a motion for divestment, but unfortunately there were insufficient attendees. In 2019, I hope that we can get the local union branches on board as key supporters of the divestment campaign.

Also in March we were invited to speak to the Kings Heath All Saints Church Justice Peace and Green Group. They were really interested in the campaign, and reminded me of how much action church groups are taking. One of my personal objectives for 2019 is to spread awareness of climate justice within churches in Birmingham. In December I joined in a personal capacity a protest at the BBC in Birmingham organised by Extinction Rebellion and Christian Climate Action, some of whose members have been arrested for direct action this year.

In April we started to prepare for the council elections in May. Elections provide a fantastic listening opportunity for the candidates, so we sent out pledges calling for the candidates to support fossil fuel divestment. The response was pretty positive. Many individual candidates from different parties signed up, as well as whole party groups like the Liberal Democrats. We published a complete list of candidates here.

In other news from the international divestment movement, we heard in July that Ireland had decided to divest from fossil fuels. This was to be followed by hundreds of further announcements around the globe until in December, the 1000th institution pledged to pull out of fossil fuel investments. The current total today stands at nearly $8 trillion. This is enormously important because it demonstrates to institutional investors that it is no longer acceptable or prudent to profit from catastrophic climate change.

The summer heatwave brought climate change to the attention of many people, together with a significant report warning of a hothouse earth if tipping points are crossed. This prompted us to send out an email to councillors across the region calling on them to take urgent action to divest. This call was picked up by the leader of the Conservative group in Coventry City Council, Cllr Gary Ridley who asked a question in the council meeting. To follow up from this we decided to produce a report in which we found that the fossil fuel companies which WMPF invests in are not serious about action on climate change, demonstrated by their tiny (3%) investment in renewables. We had some fantastic support from Labour Councillor Cllr Bally Singh and we hope that we will soon be able to get cross party support for a council motion.

In October the United Nations IPCC released a bombshell report warning us that we only have 12 years to take drastic action to limit the most catastrophic effects of climate breakdown. For many people and governments, this was a wake up call. No longer can we continue with business as usual. But for those who follow climate change in the news, many of us felt a sense of hopeless despair that the dire warnings of scientists are not being heeded by governments. Currently the planet is on a trajectory towards over 3C taking us over expected tipping points and an uncertain future for us and our children. With millions around the world set be affected by rising sea levels, droughts and extreme weather, how can it be that even our local government continues to fund fossil fuel polluters?

The answer is that it is time for people to take the future of the planet into their own hands. We shifted our campaign focus to Coventry starting with a showing of the fracking film Power Trip. We found hope in the terrific response to the Rise for Climate action in September. And this was followed up with two meetings attended by many new members. There is passion for change in Coventry, and we are trying to keep the momentum up as we hold another open meeting in January which we encourage anyone interested to attend (sign up here). Our aim is to spin off a new campaign group, launching with actions in March. Watch this space – or join us!